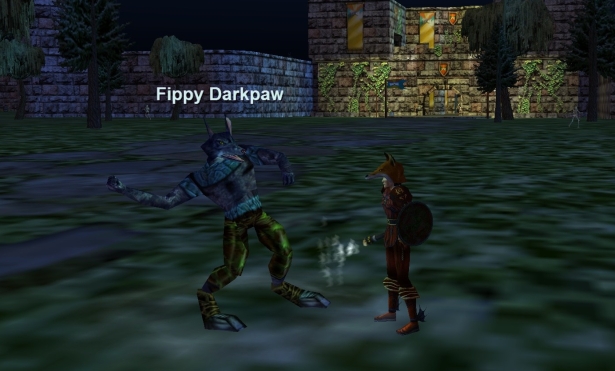 Fippy Darkpaw spawns in Qeynos North, outside the gates of the city of Qeynos.

He’s perhaps the most notable NPC in all of EverQuest.

Maybe you’ve heard of him? Or seen him streak by you in his never-ending quest to make it through the gates of Qeynos.

As the settlement of Oceangreen prospered and developed into the city of Qeynos that it is today, the clash between gnolls and humans grew more violent.

The Darkpaw clan is group of gnolls that took up residence in Blackburrow, between then Oceangreen Hills and Everfrost.

The gnolls have always been suspicious of outsiders and to this day, the animosity towards humans continues.

The original Fippy Darkpaw is innocent enough. A level 5-ish gnoll spawned in the newbie yard of the Human starting city of Qeynos.

Fippy always begins his onslaught of Qeynos with a zonewide shout.

BBBBAAAARRRKKKK!!!!! You humans will pay for ruining our homeland! GRRRRRR!! Family Darkpaw of the Sabretooth Clan will slay you all!! BARK!

He then makes a mad dash towards the heavily guarded gates of Qeynos. Usually, he’s dispatched almost immediately, falling tot he swords of the Qyenosian guards.

Occasionally, he manages to slip through, and somewhat humorously roam through North Qeynos with guards in tow.

With his popularity rising in the newbie yards of Qeynos, he became a bit of a legend in Norrath.

So much so, that in the Underfoot expansion for the game, Fippy’s noteriety puts him on the path to ascend to demi-god status among the gnolls of the Underfoot.

He was a Legend of Norrath, featured on one of the Legends of Norrath cards for the digital collectible trading card game.

Jethal Silverwing even wrote a song about him!

In 2014, at SOE Live, a stuffed plush Fippy Darkpaw was made available to attendies.

Editor’s Note: I used my Fippy as a tree topper for my “Frostfell Tree.”

The Lineage of Fippy

While not much more has been fleshed out about Fippy in EverQuest Live, in EverQuest II, we see a continuation of the Darkpaw lineage, including Fippy.

You can visit “Fippy’s Hill” in Antonica in EverQuest II. As well as meet Fippy Darkpaw the 4th, who’s still plotting against the humans in Qeynos.