Skip to content
Date: May 13, 2020Author: The EverQuest Show 0 Comments

You either love them.

Or you hate them. 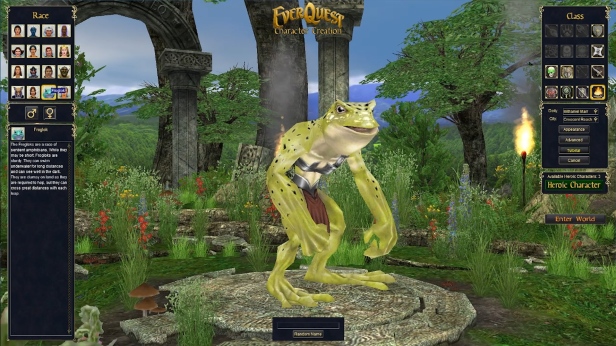 This expanded the playable race options from 14 to 15.

There were 12 original races when EverQuest launched in 1999. The Iksar, a sentient lizardman race, were introduced in EverQuest’s second expansion, the Ruins of Kunark.

The Vah Shir, a feline race on the moon of Luclin, descended from the Norrathian Kerrans, were added in Shadows of Luclin,

According to Tom Tobey, artist and animator for EverQuest and EverQuest 2, the race was chosen for specific reasons.

“We finished Planes of Power, and that was December. And they came to us and said we need an expansion quick.”

The next expansion was set to launch in February. And they wanted a new playable race to add to the expansions features.

“Well, what can we do? How about these frogs? So that’s where we went with it,” Tobey explained.

Previously in the game, a sentient race of frogloks could be found in some of the original dungeons in Norrath, including their home, Guk (Upper and Lower Guk zones on Antonica).

They could also be found in the Ruins of Sebilis and throughout the continent of Kunark.

Describing the process of creating the froglok characters, Tobey explains what changes needed to be made.

“The froglok was so much fun. Let’s take this in a different direction than what’s in there. Because the frogs that are in there are terrible.”

The older models consisted of lower polygon counts, and a rigid animation.

“We were under the assumption that our new frogs were going to replace the old frogs.”

But that isn’t the case. Both can still be found in the game. Players can only play as the new Guktan model, though illusions exist for both models in the game.

“You can’t take a character out of EverQuest, because some player is going to be like, ‘That character was my favorite character.’ So they’re still in there.”

And how did a Peter, Paul and Mary song have an impact on EverQuest?

“I started singing ‘I’m in love with a big blue frog’ so there’s a blue frog in there because of that song.”

Tobey is referencing the 1967 song “I’m in Love with a Big Blue Frog” by Peter, Paul and Mary.

But why did frogs make the cut? It was the ease of using a single animation for both genders of a model.

“I had no time to animate a male character and a female character. So they share the animation. The female versions are a little bit svelter.”

And frogs are still some of the most beloved (and hated) characters in the game.

Their starting city has changed from Grobb (after a war that allowed the frogs to take control from the Trolls) and a subsequent removal and forced relocation to Rathe Mountains.

You can find the interview with Tom Tobey on the latest episode of The EverQuest Show.